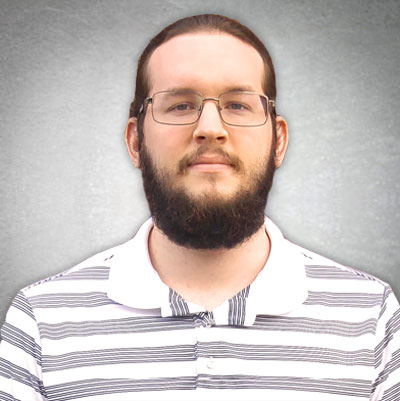 There are at least two things that keep Sebastian Sweeden from villainous world domination. First, he hates public speaking. And everyone knows that the evil monologue is an absolute prerequisite for nefarious conquest. Second, Sebastian would rather sleep all day and play video games all night – something an ambitious supervillain would eschew.

Sebastian is a problem solver. One of his favorite sayings is from Alejandro Jodorowsky, “One day someone showed me a glass of water that was half full, and he said ‘Is it half full or half empty?’ So I drank the water. No more problem.” (Even though that’s a rather James T. Kirk kind of response, his true loyalty lies with Star Wars).

One of the aspects of backend programming Sebastian likes best is seeing instant results. We can’t blame him. If he were living a couple of hundred years ago, he’d be the village blacksmith or some kind of merchant. Smashing your thumb or running out of potatoes to sell are definitely instant results.

Don’t ask Sebastian to go to a zombie movie with you, or watch a reality TV show. That would be a Venti cup of Nope. But the old TV show Lie to Me is one of his favorites. He’d also like to try skydiving and someday learn to play the drums. Speaking of music, what’s he listening to these days? Everything from classical piano to death metal.

Everyone at United WebWorks has at least one quirk. Sebastian’s is food-related – apparently he has to eat each type of food on his plate in a certain order. You’ll have to ask him if it’s always dessert first. This actually comes in handy when he’s being “Uncle Sebastian” to his niece because she  really like eating brownies for breakfast.